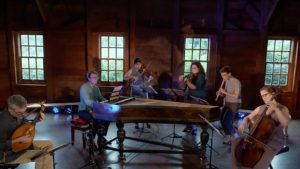 Robert Burns (1759-1796), Scotland’s national bard, played a major role in the preservation of Scottish traditional music, joining a group of collectors who were mainly interested in capturing the texts of ballads passed down orally and thus subject to subconscious or intentional changes as they moved from host to host — not unlike viruses, as we now know all too well.

That process created the families of related songs most famously codified in five volumes published from 1882-1898 by Harvard professor Francis James Child. On this program, one of the best-known families provides soprano Elena Mullins with the material for a sensitive rendition of Barbara Allen…” – Daniel Hathaway for ClevelandClassical.com