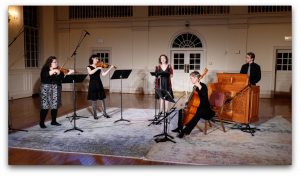 “Les Délices premiered another winner this weekend with the debut of their pre-recorded Christmas concert “Noel, Noel,” a highly enjoyable blend of English, French, and German carols, interspersed with Christmas-themed poetry from authors as diverse as Christina Rosetti and e.e. cummings. (The program is available until December 27. Click here for tickets.)

Earlier in the year Les Délices had put out a call to local poets to submit Christmas poems for this concert. Three were chosen: Diane Kendig’s At the Christmas Tree, Dave Lucas’ Three Kings, and Julie Warther’s one child’s candle. The styles are diverse, from Kendig’s sonnet to Wather’s six haiku miniatures.

Veteran Cleveland radio and television personality Dee Perry is the reader, showing great sensitivity to each of the texts, and adding simple hand gestures to enhance their meaning. The overall organization of the concert is reminiscent of a ‘lessons and carols’ service.” – by Timothy Robson