Posted at 22:29h in News & Reviews, The White Cat by Debra Nagy
Share

Tenor Jason McStoots is a beloved, long-time collaborator who will not only perform the character of The Prince in Les Délices’ upcoming productions of Into the Labyrinth and The White Cat, but will also serve as Stage Director. 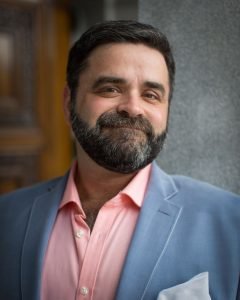 We spoke with Jason about his work and what he’s most looking forward to in the upcoming production.

What are you most looking forward to about this production?

Well from a personal perspective, I would say that one of the things I’m most looking forward to is spending time with a warm and friendly group of spectacular musicians. Long and challenging rehearsals are so often made pleasant by excellent company. Artistically, I would say that I’m very much looking forward to working with puppets again. I’ve been in a number of productions that incorporated puppetry and I find it an expressive and beautiful aspect of the dramatic arts that is also underrepresented in our modern theater scene.

What is or was the most interesting or challenging part or element in your work for this project?

I love that this question juxtaposes the ideas of interesting and challenging. Often they are similar. As both the project’s stage director and a principal character, I would identify one of my primary challenges as being fully engaged and present in my interpretation of the wandering prince from the story while still keeping a director’s sense for the working of the production and stage elements as a whole. It is not my first experience both directing and performing in a show, but it is always a challenge. Additionally, this production draws on so many evocative tools of stage performance that thinking with my director’s hat I would say presenting a final product that feels like a strong and expressive, unified whole is foremost in my thoughts.

As a Pastiche entertainment, Into the Labyrinth and the White Cat will take inspiration from various 17th and 18th century original sources. What styles or sources have most inspired you in the work that you will bring to the production?

As a performer and stage director I am quite at home in the time and geography of this music. I am fortunate to regularly perform and stage works from the baroque stage. I know that the earlier French baroque style can often be mysterious to many performers, but I find it lively, beautiful and flexible. Familiarity surely helps in this regard. From a wider perspective, one of the things I am quite excited about is the form of the pastiche. Certainly, it was a more common artistic undertaking in other eras, here one need only look to the many successful early 20th century pastiche shows of Gershwin and Berlin for helpful example. The idea of taking already known and loved music and repurposing it to tell a different or fuller story is a fun challenge for all of us. A few years ago when I first had the occasion to work with Larry Rosenwald, I was so moved by the spoken verse he created for narration that I immediately felt that having him supply the libretto for a pastiche show would be a perfect marriage. In this past year, and without prompting from me, Debra thought so too and engaged him to produce this smart, charming and fun libretto for our story.

In your view, what makes this show unique?

So many things! From the point of view of the Les Délices audience, the French baroque score is not that unusual as Debra frequently presents French music from this period, but in this case the idea of a fully staged theatrical event is novel. As well, the production makes use of so many expressive elements: Beautifully arranged French baroque chamber music, full staging with set and costumes, vivid projected images drawn from the art of the period, baroque dance, and oh, didn’t we mention? PUPPETS – of cats, no less. Also there are not a ton of fairy tales about cats, but this one, by a female author, has a fresh and original perspective that is honored and enhanced by Larry Rosenwald’s delightful libretto.

What do you think general/adult audiences should or will appreciate in this show?

Like most great fairy tales, the story communicates on many levels. It goes without saying that I feel the high quality music and evocative visual elements of the story will be appealing to both children and adults; but in terms of the story, I feel that adult audiences will be moved by the plight of a young man seeking to find his place in the world who makes a deep and lasting bond with another and cherishes that bond without putting his own needs first. From the perspective of the cat, they will encounter a character who has all that she may want or need but seeks out true love and friendship in an unlikely person and that this connection offers her a transformative experience.

What do you hope kids will take away or most enjoy?

Well first – the puppets of course! And the fact that this is a fairly tale, puts ideas on a level that kids can connect with. I think in general children love the theater experience. Going to an unusual place, hearing and seeing things they have never seen before, and having the performers be live and in person – all these things are not common occurrences for children these days. I think they will love all the magical elements of the show and I hope fall in love with the art of live theater.

2019-2020 Season, Collaboration, Into the Labyrinth, Jason McStoots, The White Cat