This week, we’d like to introduce you to historical horn player Todd Williams. 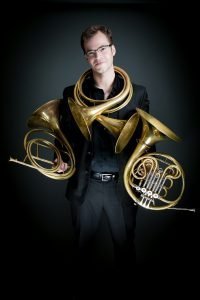 Hailed by Gramophone for his “impressive horn playing,” Todd Williams is an active performer and educator based in Philadelphia. A leading exponent of the Natural Horn in America, he serves as Principal Horn of numerous ensembles across the country including the Handel & Haydn Society, Boston Baroque, Trinity Baroque, Clarion Society, Apollo’s Fire, Mercury, Opera Lafayette, Tempesta di Mare, and more. This season he’s served as guest principal for Tafelmusik (Toronto) and the American Bach Soloists (San Francisco) and procured future solo engagements with Philharmonia Baroque. On the topic of the Natural Horn, he has conducted lectures at the music schools of Curtis, Eastman, and Oberlin and in 2019, joined the faculty of the Juilliard School. On the modern valved horn, he is a staple of the Philadelphia music scene performing with the Philadelphia Orchestra, the Chamber Orchestra of Philadelphia, Opera Philadelphia, the Pennsylvania Ballet, and the Philly Pops. From 2003-2014, he served as solo horn of the opera festival Lyrique-en-Mer, France. He’s recorded for Deutsche Grammophon, RCA/Sony Records, Atlantic Records, CORO, Naxos, Musica Omnia, Chaconne/Chandos, and Warner Brothers. Todd is a graduate of Indiana University.

Todd was kind enough to take some time share a bit more information about himself, his path to where he is today, and his thoughts on the Mozart and Beethoven pieces that make the centerpiece of this concert.

I got into Early Music by dumb luck. Destiny? Nah, let’s go with dumb luck. Really, I was at the right place at the right time. I studied at Indiana University. IU is home of a superlative Early Music Institute, but I didn’t attend that university for that reason. I didn’t know what “Early Music” was.

Rick Seraphinoff was my very first horn teacher. Rick is one of the most sought after players, teachers, and instrument builders of the Natural horn in all of North America. But I didn’t know that at the time. And he was my very first teacher. Not just on the Natural horn, but on the valved horn as well. You see, I never took private lessons prior to college. My father studied music at IU and I knew I wanted to do the same. When I showed serious interest in the horn, he bought me a book called “The Art of French Horn Playing” by Philip Farkas. Farkas, arguably one of the greatest horn pedagogues of the later half of the 20th century, taught at IU. My father (a voice and Music Ed major) said, “even I remember hearing this name while I studied there. If you’re serious about the horn, you should read this book.” My path seemed clear.

So, I got the book and taught myself how to play the horn. Naively, I thought I had a pretty good handle on things. After all, I was first chair basically every year since I started in the 5th grade all the way through my senior year of high school. I placed in regional bands every year and made All-State every year eligible. I also attended the Governors School for the Arts program one summer. All without private lessons. And I was accepted into the IU School of Music.

When I arrived in a much higher competitive environment like IU, I quickly learned that my technique was a total disaster and it was pretty much a miracle that I got as far as I did! My first lessons were rough. Back to basics. The total beginning. Long tones after long tones. One day I remember being so frustrated during a lesson… I was so tired of butchering the same etude over and over —and no doubt Rick was tired of hearing me butcher that same etude over and over!— I dropped my horn in my lap, sighing in despair, and I pointed to a horn on the floor and I asked, “what’s that thing?” (He had horns and bells and pieces and parts all over his studio. Hanging on the walls, displayed on his desk, strewn about the floor…) “Oh this?” He smirked. “Here, try it.” It was a valveless, “Natural” horn. From the first note I fell in love. I was hooked.

The next semester I signed up for Natural horn lessons in additional to my modern valved horn lessons. I couldn’t get enough. I played in the Baroque Orchestra as well as the Philharmonic. Essentially I was a double major, eventually earning diplomas on both, modern horn and the Natural horn. In a sense, the Natural horn has been with me from the beginning. Well, since my formal training began at least. It’s never left me and it continues to guide my present and shape my future. Not in my wildest dreams would I have ever imagined that one day I would teach the Natural horn at Juilliard.

Oh, I love the horn. So much of it. The history, the design… but above all, the sound. The sound of the horn is what drew me to it. Its deep rich dark timbre lends itself to soulful expression. Whether singing a phrase or just sustaining an isolated note within the fabric of the music. It makes us the perfect binder of any ensemble. We’re the glue of an orchestra. We blend with everyone. The brass, the winds, the strings, the voice… I really love the horn.

Ooof, So many answers, so little time! HA! Well, the horn is notoriously unforgiving. It’s treacherously difficult for the best of players. It barks a lot and if you’re not in control, it will definitely bite back. We play long tones for hours and hours in our training (and continue to do so for the rest of our career) to help tame this beast. As one of my former teachers (Myron Bloom, who’s very recently passed away — may he rest in peace) said, “we’re trying to improve the odds.” The odds of accuracy, stability, reliability, dependability, etc. Long tones help develop stability of sound, maturity of tone, improve intonation, reliability of articulations, security in the upper tessitura. There’s a lot going on — and that’s just to attack one note without cracking!

The music itself. Collaborating with likeminded musicians is deeply satisfying and discovering fresh new ideas from new colleagues can always open new worlds of expression and perspective, but ultimately it’s the music itself that has the strongest pull for me. Mozart and Beethoven were geniuses. It’s a privilege to perform their music.

How would you describe either of these pieces to someone hearing them for the first time?

Sonic bliss. The colors available are magical, especially when played on period instruments.

Beauty never goes out of style. While tastes change and interpretations may vary, we’re all striving to make a beautiful sound. As I mentioned before, they were geniuses. Masters of their craft. Their astounding use of harmony and melody, rhythmic structure, expected arrivals within the musical journey, the unexpected deviations within the same journey… It’s like Shakespeare. There’s something there for everyone. The basic story is simple. But when you start to peel away layer upon layer of detail, there’s so much more. It’s simple. Yet sophisticated. That’s always satisfying. It’s timeless.

Sonic bliss, indeed! Thank you for sharing your thoughts, Todd. We’re so looking forward to having you here!