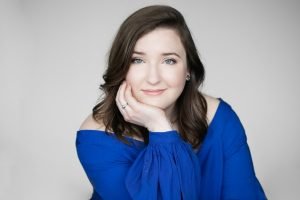 Rising-star soprano Hannah De Priest joins Les Délices for Bewitched, the opening concert of our 2020-21 Season. For Bewitched (premiering Oct 22), Hannah will sing music inspired by the mythological witches Medea and Circe. She’ll return for Schubertiade, our Nov 2 episode of SalonEra, where we’ll explore gothic themes in early 19th C art song. We caught up with Hannah in anticipation of rehearsal and recording sessions for Bewitched.

Debra Nagy: We’ve known each other for a long time and I’ve been admiring your singing and cheering you on professionally from afar for a while! This is the first time we’ve had the opportunity to work together in the context of Les Délices. What are you most looking forward to?

Hannah De Priest: I am so looking forward to my road trip to Cleveland for this project! I’m very grateful for Les Délices’ exceptionally nimble pivot to filmed content this season. As a musician in this perilous moment, I treasure the opportunity to safely gather and collaborate with such a stellar team. I feel extremely lucky to be part of such a creative, bold plan.

And yes, we have known each other since I was a very green, keen graduate student at Case Western! Your mentorship and support from then to now has meant so much to me. I’m thrilled to have the chance to work with you and a full complement of artists I admire greatly in a professional context. Les Délices does French baroque music at a uniquely high level and I am counting down the days to our first rehearsal!

DN: Bewitched will debut around Halloween and centers on two famous sorceresses, Medea & Circe. Do you have a favorite witch from fiction, history, or movies? If so, why?

HP: When I was a child, Bette Middler’s camp yet utterly terrifying snaggle-toothed Winifred Sanderson from the movie Hocus Pocus made a big impression on me. Around the same age, I inherited my sister’s copy of Roald Dahl’s The Witches. The Grand High Witch, especially as scrawled by Quentin Blake, gave me nightmares for months. Her claw-like fingernails! The human mask she peels off to reveal her hideous witch face…!

In music, for me, nothing comes close to the opulent and chaotic renderings of witches in French baroque opera. It was watching Stéphanie d’Oustrac’s entrancing performance in Lully’s Armide that made me fall in love with the repertoire full stop. Armide is a real dream role for me – not only is she at the center of a real psychological drama, she gets to sing the most incredible music!

HP: It’s rare to be able to say this, but every moment in these two cantatas is gratifying to sing. I particularly love Clérambault’s masterful Medée, which really feels like a perfect mini-opera. The cantata builds toward the incantation scene, where Medée fully commits to her evil plot and summons the “cruel daughters of Hell” to help her murder Jason’s new lover (yikes!) She casts this eerily beautiful spell over and over and it is – pardon the pun – utterly spellbinding.

In Circé, my favorite moment comes quite early on in a recitative with this incredibly virtuosic violin obbligato that I can’t wait to hear Julie Andrijeski play. In this moment, Circé is also summoning evil spirits and their names are called out one by one: the Furies, the Fates, Nemesis, Cerberus, Phlegethon, Hecate, AlectonÔÇª I love it because you sense both Circé’s profound rage and her exhilaration at her own power.

DN: You’ll also join us for a special Schubertiade episode on SalonEra on November 2 that picks up on Gothic themes like emotion, terror, and the sublime. You’ll sing Mendelssohn’s Hexenlied and Schubert’s Gretchens Bitte. Why did you choose those?

HP: I’m so looking forward to our spooky Schubertiade! I wanted to find two songs that fit the theme equally well but were completely different in tone and structure. Mendelssohn’s wickedly dark “Hexenlied” is perhaps the more obvious choice. It’s an over-the-top paganistic ode to spring, complete with fiery dragons and a coven of witches declaring fealty to Satan. The text by Ludwig H├Âlty is fantastically rich and descriptive and Mendelssohn’s quick-tempo setting of it is disarmingly comic – Bette Middler’s Winifred Sanderson would nail this song, I think!

Where “Hexenlied” is pure raucous fun, “Gretchens Bitte” is more psychological. It’s a setting of Marguerite’s soliloquy from Goethe’s Faust, a disquieting, frightening tragedy that made a big impact on Schubert. While other musical adaptations of the Faust story focus mainly on Faust’s deal with the devil, Schubert tended again and again toward Marguerite. This song is a gut-wrenching, rather operatic setting of her prayer to the Virgin Mary. In it, you hear the full depth of her despair and longing for salvation. Though not technically a full song, (Schubert never finished setting the final three stanzas), it’s my favorite of his Faustian settings.

DN: Besides music for Bewitched, what other creative projects have you been working on recently?

HP: With my boyfriend Michael, an excellent pianist, I’ve dipped my toes into the wild world of virtual performances. Earlier this summer, we organized two streamed concerts of music mostly by Beethoven. While it felt a bit odd to perform An die ferne geliebte for no perceptible audience but our kitchen appliances, the response online was really affirming. We’ve recently upgraded our recording equipment, anticipating more online recitals and virtual auditions in the coming months. I’m hoping to study more complete song cycles. At the top of my list right now is Samuel Barber’s Mélodies passag├¿res. We are also planning a program that will feature concert arias and songs written for Josepha Duschek, a fantastic soprano who worked closely with Beethoven and Mozart and, (unusually for a woman in the 18th-century), had a very successful career as a freelance musician. I’ll also be working hard on my repertoire for several postponed competitions, including the International Bach Competition hosted by Bach-Archiv Leipzig.

And I’ve rekindled my fascination with 17th century music! I’ve been lucky to participate in two virtual courses on early ornamentation, one by New York’s ARTEK and the other via Schloss Wei├ƒenbrunn in Germany. It’s been so pleasurable to experiment with the diminutions and vocal effects that make the repertoire so special. Using my voice in such a radically different way has injected a much-needed sense of play into my daily practice.

DN: You *may* or *may not* be a witch, but do you have a secret superpower?

HP: I’ve been vegetarian for a little over a decade(!) and while I rarely proselytize about it, I get a little thrill every time I cook for a meat-eater and they say something like, “Oh I didn’t miss the meat!” I’m not sure it counts as a superpower as I prefer to cook from recipes rather than extemporize, but I love cooking with all kinds of vegetables and over the past ten years, I’ve gotten quite good at it! These days, I’ve been working through my summer CSA with considerable help from Bryant Terry’s fantastic Vegetable Kingdom and Michael Pollan’s Mostly Plants.

DN: Have you picked up any new pastimes or hobbies since the pandemic began?

HP: I’ve checked off quite a few of the more stereotypical pandemic activities by now — I can bake a decent loaf of sourdough, gotten quite good at making cocktails, watched a lot of TV, (we recently finished the series Orphan Black – highly recommend!), read dozens of novels, and we recently adopted a dog! But the most affirming quarantine decision we’ve made, (besides getting our little Teddy), was to start regularly exploring the forests and hiking trails in our area. I was raised to believe absolutely in the mental and physical benefits of what my dad calls the “daily constitutional” and I’m grateful to live in a part of the city where it’s relatively easy to get out into nature for a good long walk.