Posted at 14:04h in Press by Jane Leggiero
Share

IN JANUARY 2020 CONCERTS BY LES DéLICES 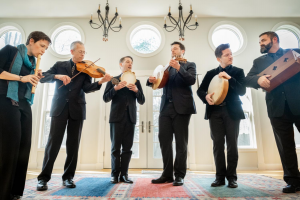 “ExcellentÔÇªcommendable ease, understanding and expressivenessÔÇªfascinating glimpses into a sophisticated musical world that treated its subjects with wit, humor and grace. And more than being merely historically intriguing, the music was lovely to listen to.”
– Daniel Hathaway, Cleveland Classical

Poets and musicians in 14th Century France might not have been aware of Zen philosophy, but their work certainly resonates with those teachings.

Lessons in Love sees Les Délices return to the Medieval world of the Romance of the Rose, where the allegorical character Hope (Esperance) teaches us how to live ethically in a world that is not designed to assure human happiness. Rather than strive for achievements or possessions (which Fortune can easily, quickly, and unflinchingly reverse), Hope invites us to cultivate indifference. Instead of desire, we should accept the good things that have come to us without wishing vainly for things that are impossible.

Presented in collaboration with Boston’s Blue Heron (Scott Metcalfe, director), Lessons in Love explores 14th-century songs in the hypnotic late-medieval Ars subtilior style that draw inspiration from each other’s words and music. Singers from Blue Heron combine with Les Délices instrumentalists playing harp, fiddle, lute, and Medieval woodwinds for three performances January 16-19 in Akron, Lakewood, and Shaker Heights. The ensemble will also offer a free family-friendly program Medieval Dance Party at 11am on January 18 at the BOP STOP in Cleveland.

The messages in the music might be old ÔÇô but their wisdom is timeless. Les Délices’ director Debra Nagy explained her passion for relating early music to our contemporary world, “I love creating a space that fosters human connection for audiences. When listeners realize that we all share similar struggles and emotions ÔÇô across space and time ÔÇô the experience becomes much more potent.”

The songs by 14th-century masters Guillaume de Machaut, de Caserta, Senleches, and others sound surprisingly modern too. Nagy explained, “The 14th Century marked an intellectual high point when thinkers and artists from every discipline were exploring new ideas ÔÇô manipulating them, playing, pushing, and prodding to see just how far they might stretch. Composers responded by writing music that fearlessly explored rhythmic complexity and flirted with the limits of what is possible in performance. The results make for intoxicating listening!”

Lessons in Love marks the third time that Les Délices has teamed up with Blue Heron to present Medieval music in Cleveland. Artistic director Debra Nagy explained, “Late-medieval music is a second specialty for both me and violinist Scott Metcalfe. Les Délices first collaborated with Scott’s ensemble Blue Heron in 2014 for “14th-Century Avant-Garde.” That program was such a success that we have continued to build on that work to bring Medieval music to our Northeast Ohio audiences.”

Blue Heron director Scott Metcalfe added, “Blue Heron’s collaborations with Les Délices have borne fruit in some of our most interesting projects, as both ensembles have ventured a bit outside their home territory to explore music of the 14th century. Debra is a great friend and a great colleague and I look forward to much more!”

Les Délices will present three performances of Lessons in Love beginning on Thursday, January 16, 2020 at 7:30pm in Akron at Holy Trinity Lutheran Church (50 N. Prospect Street, Akron). Performances will be repeated on Saturday, January 18 at 7:30pm at Lakewood Presbyterian Church (14502 Detroit Rd, Lakewood) and on Sunday, January 19 at 4:00 pm in Herr Chapel at Plymouth Church UCC (2860 Coventry Road, Shaker Heights), preceded by a pre-concert lecture at 3:00pm by Scott Metcalfe.

Subscriptions ($65-$136) and Single Tickets ($25-$40) for all concerts in the series are available at www.lesdelices.org. Senior Tickets ($25) and Student Tickets ($5) are always available at the door. Online registration for Saturday LD@Play programs is recommended by not required.

Les Délices (pronounced Lay day-lease) explores the dramatic potential and emotional resonance of long-forgotten music. Founded by baroque oboist Debra Nagy in 2009, Les Délices has established a reputation for their unique programs that are “thematically concise, richly expressive, and featuring composers few people have heard of.” The New York Times added, “Concerts and recordings by Les Délices are journeys of discovery.” The group’s debut CD was named one of the “Top Ten Early Music Discoveries of 2009” (NPR’s Harmonia), and their performances have been called “a beguiling experience” (Cleveland Plain Dealer), “astonishing” (ClevelandClassical.com), and “first class” (Early Music America Magazine). Les Délices made its New York debut before a sold-out audience at the Frick Collection in May 2010. Highlights from recent seasons included performances for Music Before 1800, Boston’s Isabella Stewart Gardner Museum, San Francisco Early Music Society, the Yale Collection of Musical Instruments, and at Columbia University’s Miller Theater. In addition to touring engagements, Les Délices presents its own annual four-concert series in Akron, Lakewood, and at Plymouth Church in Shaker Heights, OH, where the group is Artist in Residence. Their critically-acclaimed 4th CD, “Songs without Words,” was released in November 2018. Visit www.lesdelices.org for more information.

“A baroque oboist of consummate taste and expressivity” (Cleveland Plain Dealer) with a musical approach that’s “distinctly sensualÔÇªpliant, warm, and sweet,” (New York Times), director Debra Nagy is one of North America’s leading performers on the baroque oboe. She plays principal oboe with the Handel & Haydn Society, Apollo’s Fire, and American Bach Soloists, and is a regular guest with other ensembles around the country. Following studies at the Oberlin Conservatory, Conservatory of Amsterdam, and Case Western Reserve University, Debra has received many awards for her creative and scholarly pursuits including first-prize in the American Bach Soloists Young Artists Competition, a 2009 Fellowship from the National Endowment for the Humanities, and a 2010 Creative Workforce Fellowship from Cuyahoga Arts & Culture. She has recorded over 30 CDs with repertoire ranging from 1300-1800 on the Chandos, Avie, CPO, Capstone, Bright Angel, Naxos, and ATMA labels, and has had live performances featured on CBC Radio Canada, Klara (Belgium), NPR’s Performance Today, WQXR (New York City) and WGBH Boston.

The vocal ensemble Blue Heron has been acclaimed by The Boston Globe as “one of the Boston music community’s indispensables” and hailed by Alex Ross in The New Yorker for the “expressive intensity” of its interpretations. Combining a commitment to vivid live performance with the study of original source materials and historical performance practices, Blue Heron ranges over a wide repertoire, including 15th-century English and Franco-Flemish polyphony, Spanish music between 1500 and 1600, and neglected early 16th-century English music, especially the unique repertory of the Peterhouse partbooks, copied c. 1540 for Canterbury Cathedral. The ensemble also regularly performs earlier and later music, from a concert version of Guillaume de Machaut’s Remede de Fortune to a collaboration with A Far Cry featuring Gabriel Fauré’s Requiem and Le Cantiques des Cantiques for twelve voices by Jean-Yves Daniel-Lesur, composed in 1952, and in 2020 Blue Heron will perform Devran (2017) by Boston’s own Mehmet Ali Sanl─▒kol.

Scott Metcalfe has gained wide recognition as one of North America’s leading specialists in music from the fifteenth through seventeenth centuries and beyond. Musical and artistic director of Blue Heron since its founding in 1999, from 2010 through 2019 he was also music director of New York City’s Green Mountain Project (Jolle Greenleaf, artistic director), whose performances of Claudio Monteverdi’s Vespers of 1610 and other Vespers programs devised by Metcalfe were hailed by The New York Times as “quite simply terrific” and by The Boston Globe as “stupendous.” Metcalfe also enjoys a career as a baroque violinist, playing with Cleveland’s Les Délices (dir. Debra Nagy), Québec’s L’Harmonie des Saisons (dir. Eric Milnes), and other ensembles. He has taught vocal ensemble repertoire and performance practice at Boston University and Harvard University and served as director of the baroque orchestra at Oberlin Conservatory; in 2019-20 he has been appointed a visiting member of the faculty of Music History at the New England Conservatory.

What: Lessons in Love: Hypnotic late-medieval music from the world of the Romance of the Rose.