Posted at 19:44h in Press by Jane Leggiero
Share

Praise for Songs without Words 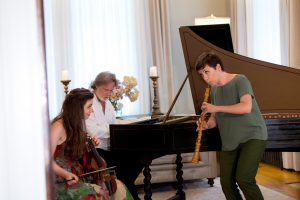 Baroque music and Jazz? It’s not as crazy a combination as one might think. And in the hands of Les Délices’ artists, “downright impressive playing underpins all the emotion and energy.” (Early Music America).

Building on the success of their 2018 crossover album Songs without Words, Les Délices will take the Baroque-meets-Jazz concept to another level in three performances of their new program Torchsongs Transformed in Akron, Lakewood, and Shaker Heights, March 6-8, 2020. 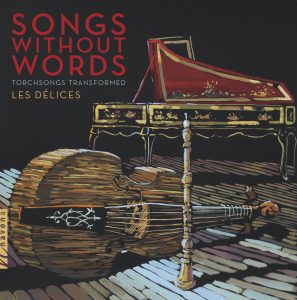 Les Délices also hopes to reach new audiences with this fusion program. Artistic director Debra Nagy commented, “This program is a great introduction to our work since it really typifies what LD does best: it’s an intimate, thoughtful program combining both unusual and beloved songs ÔÇô and it’s also deeply expressive.”

Torchsongs Transformed will trace the arc of a love affair across the seasons as Les Délices artistic director and oboist Debra Nagy teams up with soprano Hél├¿ne Brunet and beloved collaborators from Quebec’s L’Harmonie des Saisons.

Whether one is talking about love ÔÇô or great music-making ÔÇô chemistry is key. Harpsichordist Eric Milnes, viola da gamba player Mélisande Corriveau, and oboist Nagy all love working together and speak a common language when it comes to spontaneity, improvisation, and making magic happen onstage. Soprano Hél├¿ne Brunet will add something new to the mix.

While Les Délices’ first forays into combining jazz and French Baroque music were entirely instrumental, the addition of Brunet will enable the group to put words to all those songs! But choosing the right singer wasn’t easy. Nagy explained, “I wanted to bring a singer who could sing both the Great American Songbook and who truly knows French Baroque style. Hél├¿ne is fabulous with audiences and can really do both! It will be a thrill to bring her into this collaboration. Torchsongs Transformed will really allow audiences to appreciate the personalities of and chemistry between these artists since the concert is so strongly rooted in improvisation.”

The program’s emotional journey follows love’s first bloom in Springtime (with tunes like Edith Piaf’s famous “La vie en rose”) through the endless days of Summer (George Gershwin’s Summertime and Luiz Bonf├á’s bossa nova anthem “A day in the life of a fool”). Fall’s changing winds (Johnny Mercer’s “Autumn Leaves”) give way to Winter’s seeming desolation in anticipation of verdant renewal (Jerome Kern’s “All the things you are”). Les Délices will juxtapose these 20th century tunes with love songs by French Baroque masters Michel Lambert, Jean-Baptiste Lully, and Sebastian Le Camus, creating opportunities for listeners to hear all of the music differently in a work that is truly timeless.

Several factors make this 17thÔÇô20th century combination work. Not only do the universal sentiments of love, longing, loss get similar treatment across the centuries, but 17th century French songs and jazz standards also share improvisatory traditions and an impressively rich harmonic language. “To be honest, combining Baroque music with Jazz would a lot less convincing if we were trying to pair Telemann or Handel (i.e. German or Italian Baroque music) with Thelonious Monk! The harmonic language in their music is so much simpler and the melodies are very structured,” explained artistic director Debra Nagy. “We’ve also chosen the 20th century works very carefully. I sought out tunes that used harmonic sequences and repeating bass patterns that ÔÇô while allowing us to stretch technically and expressively ÔÇô would still feel pretty natural when played on period instruments.”

Inspired by Bruce Haynes’ observation that “authenticity is not a product of the instrument being played, but of the musician’s sense of style,” Torchsongs Transformed will combine written and improvised music in ways that feel authentic and fresh.

Remaining 2019-20 concerts offer an exciting array of unique music and extraordinary artists. In April 2020, a fabulous creative team including puppet designer Ian Petroni (of CMA’s Parade the Circle) and Shawn Keener (visual display) will bring to life Aesop’s fables and 17th Century fairy tales when we present Into the Labyrinth and our family-friendly program The White Cat (April 23-26, 2020).

Les Délices (pronounced Lay day-lease) explores the dramatic potential and emotional resonance of long-forgotten music. Founded by baroque oboist Debra Nagy in 2009, Les Délices has established a reputation for their unique programs that are “thematically concise, richly expressive, and featuring composers few people have heard of.” The New York Times added, “Concerts and recordings by Les Délices are journeys of discovery.” The group’s debut CD was named one of the “Top Ten Early Music Discoveries of 2009” (NPR’s Harmonia), and their performances have been called “a beguiling experience” (Cleveland Plain Dealer), “astonishing” (ClevelandClassical.com), and “first class” (Early Music America Magazine). Les Délices made its New York debut before a sold-out audience at the Frick Collection in May 2010. Highlights from recent seasons included performances for Music Before 1800, Boston’s Isabella Stewart Gardner Museum, San Francisco Early Music Society, the Yale Collection of Musical Instruments, and at Columbia University’s Miller Theater. In addition to touring engagements, Les Délices presents its own annual four-concert series in Akron, Lakewood, and at Plymouth Church in Shaker Heights, OH, where the group is Artist in Residence. Their critically-acclaimed 4th CD, “Songs without Words,” was released in November 2018. Visit www.lesdelices.org for more information.

“A baroque oboist of consummate taste and expressivity” (Cleveland Plain Dealer) with a musical approach that’s “distinctly sensualÔÇªpliant, warm, and sweet,” (New York Times), director Debra Nagy is one of North America’s leading performers on the baroque oboe. She plays principal oboe with the Handel & Haydn Society, Apollo’s Fire, and American Bach Soloists, and is a regular guest with other ensembles around the country. Following studies at the Oberlin Conservatory, Conservatory of Amsterdam, and Case Western Reserve University, Debra has received many awards for her creative and scholarly pursuits including first-prize in the American Bach Soloists Young Artists Competition, a 2009 Fellowship from the National Endowment for the Humanities, and a 2010 Creative Workforce Fellowship from Cuyahoga Arts & Culture. She has recorded over 30 CDs with repertoire ranging from 1300-1800 on the Chandos, Avie, CPO, Capstone, Bright Angel, Naxos, and ATMA labels, and has had live performances featured on CBC Radio Canada, Klara (Belgium), NPR’s Performance Today, WQXR (New York City) and WGBH Boston.

Founded in Granby (Quebec) in 2010 by multi-instrumentalist Mélisande Corriveau and internationally renowned New York-born harpsichordist and instrumentalist Eric Milnes, L’Harmonie des saisons focuses on the repertoire of early music and performs on period instruments. The ensemble is the recipient of the JUNO 2016, Canada’s Best Classical Album of the Year – vocal art, for its first title “Las Ciudades de oro” (The Golden Cities), released under the ATMA Classique label.

Canadian soprano Hél├¿ne Brunet is hailed by the critics as “a singer of tremendous quality” with “a voice of perfect beauty” and “sincere expression”. Recognized for her interpretations of the works of Bach, Handel and Mozart, her repertoire extends from Baroque to the music of the 20th and 21st centuries. Hél├¿ne is a regular guest with reputed orchestras and ensembles across North America and Europe, notably with American Bach Soloists in San Francisco, with American Classical Orchestra at the Lincoln Center in New York City, with Orchestre Métropolitain de Montréal and conductor Yannick Nézet-Séguin, and Toronto’s Tafelmusik Baroque Orchestra. Last June, she sang at the Festival Tage Alter Musik in Regensburg, Germany. Hél├¿ne was recently a prize winner at the Lyndon Woodside Oratorio-Solo Competition at Carnegie Hall in New York. The album Las Ciudades de Oro, where she is featured with ensemble LÔÇÿHarmonie des Saisons, has won a Juno Award for best Vocal Album in 2016. Hél├¿ne is a recipient of a professional development grant from the Canada Council for the Arts.