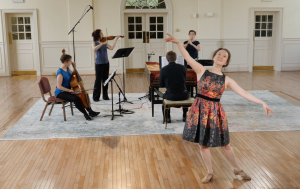 Games & Grounds premieres on Les Délices’ Watch Now Page on February 18, 2021 at 7:30pm EST and will include a live post-concert Q&A session with select artists. The program will be available to stream on-demand through March 1.

Artistic Director Debra Nagy explains that this program had multiple sources of inspiration. “I wanted to explore ideas around entertainment, imagination, and fantasy while featuring individual artists in different ways.”

Repeating bass variations (known as grounds) figure throughout the program and create opportunities to create something magical from a single idea. For instance, violinist Julie Andrijeski is featured in an extended Caprice by Rebel and viola da gamba player Rebecca Reed triumphs in Marin Marais’ tour de force Folies d’Espagne.

“But one of the real highlights of the program,” Nagy noted, “is getting to see Elena Mullins – who regularly sings with Les Délices – dance!” Mullins’ dancing will both open and close the program: she’ll perform the original 17th Century choreography for Jean-Baptiste Lully’s chaconne from the opera Pha├½ton and present her own choreography for Jean-Féry Rebel’s brilliant showpiece for virtuoso dancer, Caract├¿res de la danse.

Rebel’s Caract├¿res has its own story to tell ÔÇô even if we’re not entirely sure what it is! As Mullins explained, “For Rebel’s Caracteres we don’t have any surviving choreography, but several years after the creation of the dance, a poetic setting of the melodies was published, where each of the dance movements was personified as a different type of lover. So in this poem, for instance, you have the menuet, in which a young girl hopes that her mother will be asleep when her lover visits her at home. The gavotte apparently expresses the frustrations of a scorned woman.” Mullins’ choreography will take inspiration from these characters to enhance the experience of the dance and the music.

Musical versions of Aesop’s famous Fables serve as another bit of fun sprinkled throughout Games & Grounds. As Nagy explained, “Fables have long done double duty as entertainment that nonetheless offers lessons for us all and Aesop’s Fables were incredibly popular in eighteenth-century France. They were so popular that they were even set to music – essentially overlaid on Baroque pop tunes. We wanted to make these songs as accessible as possible, so tenor Jason McStoots and soprano Elena Mullins will sing them in delightful English translations by Guggenheim Award-winner Larry Rosenwald, who wrote the libretto for our postponed fairytale musical, The White Cat.”