Posted at 09:40h in News & Reviews, The White Cat by Debra Nagy
Share

This April, Les Délices and a team of fabulous collaborators will create The White Cat, a fairytale-based opera inspired by Baroque entertainments and based on the story by 17th-century author Marie-Catherine d’Aulnoy. Who is d’Aulnoy and what is The White Cat about? 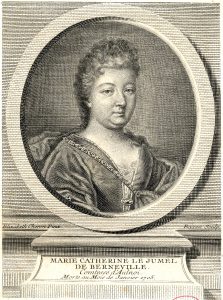 In the world of fairytales, d’Aulnoy is probably the most important writer you’ve never heard of. She literally invented the term! Her 1697 publication of Contes des fées (fairytales) included many of the stories made more famous by later male authors – such as Cinderella, Blue Bird, Goldilocks, and more. Altogether, d’Aulnoy published twelve books including three pseudo-memoirs, two fairy tale collections and three “historical” novels. 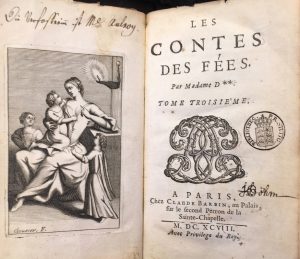 While d’Aulnoy failed to gain full recognition or popularity among English readers, she played an important role in establishing the literary fairy tale as an art form that could be practiced by serious scholars, women, and those in both categories. Learn more about her here.

In 17th century France, fairytales weren’t merely considered children’s entertainment. When recounted and embellished by women in salons, these stories took on additional meanings – for instance, offering subtle critiques about rulers and society or commenting on arranged marriages. Long and richly-detailed stories put the considerable intellects and imaginations of these women authors on full display. Sadly, fairytales penned by men – which tended to be much shorter – were the ones that stuck in our cultural imagination.

About The White Cat

Marie-Catherine d’Aulnoy’s The White Cat is a feminist re-write of Puss in Boots. We all remember the story of the youngest son whose inheritance seems slight when he is gifted a wily tomcat. Puss in Boots goes on to achieves fame and fortune on behalf of his unwitting young master through manipulation, lying, and trickery. 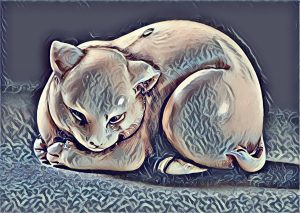 In d’Aulnoy’s The White Cat, we meet a sweet but unsuspecting young Prince whose father, the King, sets his three sons a series of challenges. Hesitant to give over his throne, the King’s series of impossible tasks not only serves as a delay tactic in anticipating his retirement, but also shows the King’s true nature: jealous, competitive, and petty.

Feeling a bit lost and hopeless in his initial quest, the Prince finds himself outside an extraordinary palace. Magical floating hands usher him through the coral and jewel-crusted gates, the walls are painted with scenes from fairytales, a cat orchestra serenades him, and, in time, he meets the palace’s extraordinary owner – the White Cat. She can sing, dance, recite poetry ÔÇô and she offers to help the Prince to the best of her limited abilities. 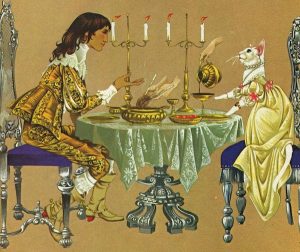 Time passes in delightful entertainments and true affection builds between the Prince and the White Cat, but he must return to his father’s kingdom and meet the King’s judgement. The White Cat gives the prince a small package whose contents are only to be revealed before the King, which is when the magic truly begins to happen…

You’ll have to join us in April for the rest of this special tale whose underlying themes show that one can exert influence through generosity and kindness (instead of trickery or manipulation), looks can be deceiving, bigger is not always better, and true love can win the day.