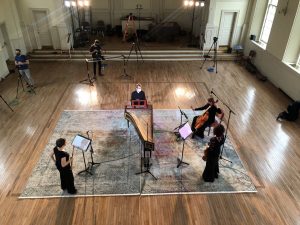 “CLEVELAND, Ohio ÔÇô The Cleveland Orchestra may be the biggest, but it isn’t the only local player in the pandemic concert streaming game. Organizations of all sizes have jumped into the digital fray.

They’ve done more than just enter it, too. They’ve mastered it. They’ve made significant artistic choices and learned a great deal about themselves, their audiences, and the future of classical music in Northeast Ohio along the way.

‘This is not a blip on a screen for any of us,’ said oboist Debra Nagy, founding director of the Baroque ensemble Les Delices. ‘There’s never going to be a time [without streaming] again. We’re going to be creating virtual versions of our concerts for a long time, if not forever.’

Les Delices, like many smaller groups, entered the world of video production virtually overnight. Unlike large organizations, such as the Cleveland Institute of Music, which already had streaming experience and technicians on staff, it had to start essentially from scratch.” – Zachary Lewis
Click here to read the full article on Cleveland.com