From “Les Délices makes a joyful return to live performance with Of Gods & Heroes” by Stephanie Manning for ClevelandClassical.com 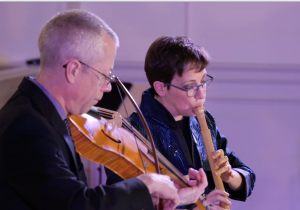 “Time and time again, Les Délices has imbued a sense of creativity into the concert experience — particularly over the past two years, when pandemic restrictions called for some out-of-the-box thinking. On February 25 in Shaker Heights, their first in-person event since 2020 proved to be no exception, blending poetry and music for an engaging evening of storytelling.

Musically, “Of Gods & Heroes” focused on the 14th century, with works by Guillame de Machaut, Matheus de Perusio, Johannes Ciconia, Jacopo da Bologna, and the ever-present Anonymous. The overarching theme divided the concert into six sections, four of them paired with a relevant poem, including tales of Pygmalion & the Statue, Jason & Medea, and Ulysses & Circe…” – Stephanie Manning