From “Les Délices: The White Cat, a new Baroque opera at the Breen” by Dan Hathaway for ClevelandClassical.com 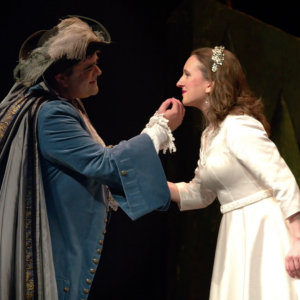 “Ailurophiles rejoice! There’s a new opera in town, created as many French Baroque titles were back in the day, out of bits and pieces of existing material, and the principal character is a large feline. (It’s actually a princess seeking to be rehumanized through the traditional heroic means of fulfilling a series of impossible challenges or quests.)

The creative team behind The White Cat begins with Les Délices artistic director Debra Nagy, who has had Larry Rosenwald adapt Marie-Catherine D’Aulnoy’s story La Chatte Blanche into a five-act (or five-quest) libretto that recasts the manipulative Puss in Boots, who gets ahead almost entirely through trickery, into a kinder, gentler feline. Each quest is linked with a French version of one of Aesop’s Fables coupled with a divertissement, and joined together by well-known tunes like Couperin’s Les Barricades Mysterieuses.

Nagy acknowledges that with this project, Les Délices set out on its own quest — to tell a story in the musical language of French Baroque Opera — because “we love it,” and that shows in every musical, literary, and theatrical gesture in The White Cat.

The production is both sophisticated and charmingly naïf. Elegant projections by Camilla Tassi change the setting from gorgeous interiors to fantastic natural scenes, and costumes and props are beautifully wrought…” — Dan Hathaway